“I lived and worked on the Moon. I called the Moon home for three days of my life.” — Apollo 17 Astronaut Gene Cernan

Those words from Gene Cernan have been floating around in my mind the past few days. Although my experiences the past two months were nothing like Cernan’s, I think I can kind of understand how he felt. I have now lived and worked on the Space Coast and at Kennedy Space Center. I called Florida my home for two months of my life. But now I’m heading home.

As you’re reading this you’re probably shouting, “What! Why is she leaving? There is a shuttle launch in 5 days!” Yeah, yeah, I know. But my family would like me back home, and I had to make the decision over two weeks ago to make arrangements to try and stay or come home, and at that time Discovery’s launch was looking iffy at best because of the stuck helium valve. So, I’ll watch the launch from home, but my heart will be at KSC.

But I had some amazing experiences in Florida. I saw three launches (space shuttle Endeavour, Atlas with SDO and Delta with GOES-P), and had the opportunity to do and experience more than I ever could have imagined. I was in space geek heaven. 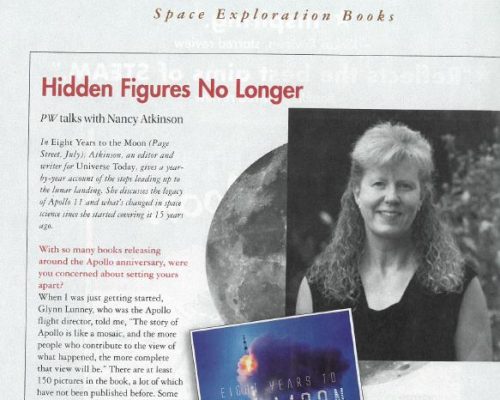 I was excited when I heard Publisher’s Weekly wanted to feature “Eight Years to the Moon” in their roundup of books about space exploration. But I was completely honored when I found out they wanted to do an interview with me. If […]

On March 2, 2010 I had the privilege to watch space shuttle Discovery’s first motion of rollout from the Vehicle Assembly Building to launchpad 39A, which began precisely at midnight. I was told first motion hasn’t been open to the press for […]


What fun it has been to follow you through your adventures! It was so great to meet you and sit next to you during Endeavour’s launch, and so great to see all the fun experiences you’ve had since. I’m sad you won’t be able to be there for Discovery’s launch, but I know your family will be happy to have you back home. I’m with you – I hope to get back to KSC soon!

PS – *love* that panoramic view there. 🙂


Hi Rachel- It was great to get to know you, too, and hopefully we’ll meet up again sometime soon! I’ll send you a larger version of the panorama when I get back home with better bandwidth!

Up Close with Discovery

The Place Where Dreams Come True