We drive through the Hawkeye State quite often and had always talked about stopping at the Field of Dreams movie site near Dyersville. We finally went there, and eerily, it looks exactly like it does in the movie. But really, it’s pretty cool: the big white farmhouse, the meticulous baseball field edged by a field of corn, and although there were probably 25-50 visitors wandering around on a nondescript Sunday afternoon, there was an air of quiet and – almost – reverence. It really felt like Shoeless Joe or Moonlight Graham could show up at any moment.

But the only voices we heard were the chatter between parents and children having a game of catch.

Being relatively ardent baseball fans, Field of Dreams is a movie we have watched often. And even though I can quote most of the movie and know each scene, I can never get through it without shedding a few tears. In it, life equals baseball, even though the movie really isn’t about sports. The movie is about nostalgia, the importance of family, yearning to make things right, realizing the wisdom of children, and it is another one of those mythological quests that we all seem to identify with.

Stepping up to the crushed rock that outlines the field, we paused a bit, thinking of young Archie Graham’s sacrifice. And heading out into the cornfield (an experience not to be missed!), you really do wonder where you’ll end up!

Being a farmer’s daughter, the first thing I noticed about the cornfield was the meticulous way it is planted. The easiest way to plant it would have been to just drive the tractor and planter around the periphery of the outfield. But, instead, the corn is planted precisely so that the rows emanate out, so that visitors can walk directly down the rows and disappear (if you are short enough….)

The Field of Dreams movie site website says the field was built in four days back in 1988 (is the movie really that old??) “and since then, it has become so much more than just a field…. Located at the intersection of fantasy and reality, it’s a living piece of movie history where tens of thousands of people each year come to have a game of catch, to hit a few balls or just spend time with the people they love – the real message of the hit movie.”

But the house, the baseball field and the 193 acre property is for sale. $5.4 million is the asking price. So far, the family who owns the farm (and they owned it when the movie was filmed) hasn’t had any offers. 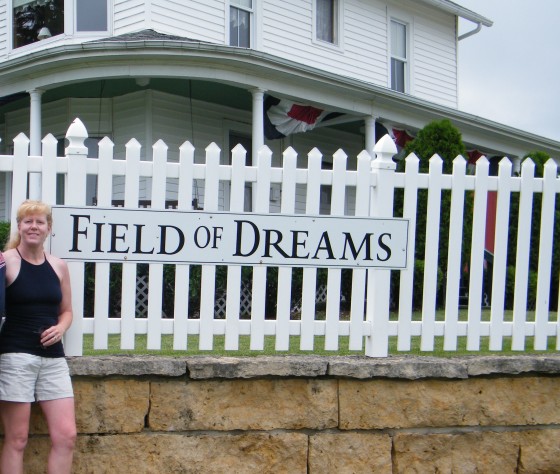 I have to say, being there was a very satisfying experience.

But then there’s another way of looking at it. Noted baseball writer Roger Angell had this to say about the movie:

“The stuff about the connection between baseball and American life, the Field of Dreams thing, gives me a pain. I hated that movie. It’s mostly fake. You look back into the meaning of old-time baseball, and really in the early days it was full of roughnecks and drunks. They beat up the umpires and played near saloons. In Fields of Dreams there’s a line at the end that says the game of baseball was good when America was good, and they’re talking about the time of the biggest race riots in the country and Prohibition. What is that? That dreaminess, I really hated that.”

Well, reality isn’t always all its cracked up to be…